See the Historic Eruption of the Summit of Kilauea Volcano 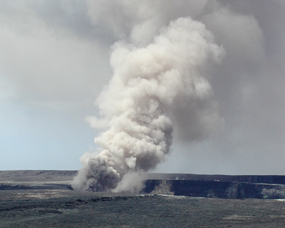 At 2:58 a.m. on Wednesday, March 19, 2008, scientists at the Hawaiian Volcano Observatory recorded a small explosion in Halema`uma`u crater, the first explosive event since 1924. Debris was scattered over a 75 acre area. A light dusting of ash fell in a community several miles away in the district of Ka`u.

On April 9, another small explosion occurred, depositing dense blocks and particles of fresh lava on the Halema`uma`u overlook area.

On April 16 at 3:57 a.m., another small explosion from the vent occurred producing a dusting of pale-red ash west of the crater.

The new explosion pit continues to vigorously vent gas and ash, with the plume alternating between brown (ash-rich) and white (ash-poor).

Cyclist on our Kilauea Volcano Summit to Sea & Wine Tasting Tour may view the new vent within Halema‘uma‘u crater and the plume from the several overlook as we bike around the summit crater.

Feed for this Entry Trackback Address